It's called Period Clothing, and there's a menu of information about the clothing of various periods (let's not get into how accurate that information is; it's certainly too brief and general to be really useful).

But there's... no historical clothing in the offerings. There are no historical categories, and the only content is actually costumes from other websites, advertised there.

We've had a few comments that seem to misunderstand the purpose of this blog, so just for clarification:

- This is a blog for snarking as entertainment and education. If you dislike that kind of thing, it won't be for you. The jokes here are aimed at the clothing itself, and not at the makers, unless the makers have done something specific to earn a comment - such as seriously mislabel their creations or make misleading statements about them, or grossly overcharge.

- This blog is focused on professionally made costumes, costumes which are being sold, and costumes which are prominent and influential. We do not snark what Joe wore to his first event last week; that would be unfair and petty. We do, however, snark the movie or website that gave Joe the wrong idea in the first place.

- Medieval costuming is a learning process. Research is still being done, sources are still being discovered, and the field is much too large for anyone to know it all. If you spot a mistake in the blog or somewhere else, please comment on it! This is also why our comments are aimed mainly at myths and bad costuming itself, and not at the people making it - perhaps they're learning, too.

- While this blog is flippant and hopefully sometimes funny, we are attempting to make it helpful as well, by providing suggestions and links to good resources as well as warnings about suspicious sources. If you have any resources we should add, please do comment and let us know about them.
Posted by Selkie at 16:19 4 comments:

Y'know those funky, sparkly chainmail headdresses you see at Ren Faires and maybe the occasional SCA event?
I sorta like them.
But they're not period.
At all.
I'm not exactly sure when people first got the idea to make chainmail jewellery, but I think the 1980s had something to do with it.  Certainly no one in the Middle Ages or Renaissance tried it... or if they did, they somehow failed to allude to it in any text or artwork anywhere, ever.
Middle-Eastern chainmail jewellery didn't exist either.
Wear it to the goth club.  Wear it to Fairycon.  Wear it to the Conan the Barbarian Appreciation Society.  But please, really, don't wear it when you're reenacting.
Posted by veruniel at 21:51 3 comments:

This is the best site I've found so far explaining the myths and giving advice for the Near East/Middle East region:

There is very little period documentation online. The first site does link to a bibliography of print sources, especially for Persia.

If you know of any other useful links or any online documentation, please add it in the comments!
Posted by Selkie at 23:11 2 comments:

Wow.  The shit that passes for 'Celtic' these days never ceases to amaze me.
Now, I have no problem with people taking inspiration from Irish/Pictish/Anglo-Saxon/Gallic/Viking/Whatever-else-have-you knotwork and making some sort of fantastical pastiche.  We've been doing it since the 19th century, and without it neither Art Nouveau nor LotR Elven architecture would have been the same.  But I do have a problem with how it's advertised.
First off, must people keep calling it 'Celtic?'  The term is very general and not associated with any single culture or ethnicity; it is used by linguists to describe a particular language group, and all other definitions are hotly contested.  In addition, people have a tendency to apply it to all knotwork of northern Europe, forgetting that the Anglo-Saxons and Vikings, whose languages were Germanic, not Celtic, have inspired more modern knotwork designs than the Irish!
Secondly, is it too much to expect that reenactment sites, which claim to be historical, would try to provide believable examples instead of total fantasy? 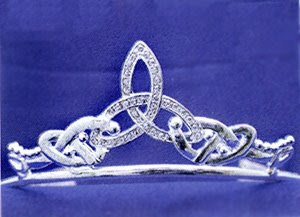 Apparently it is.  If archeological digs have turned up any tiaras, they were planted there by time travelers. 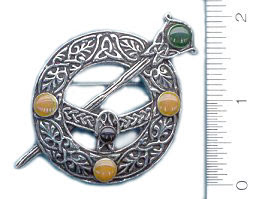 Um, what's the point of a penannular brooch with a pin that doesn't function?  And given that this thing's sporting a foliate pattern that looks more Byzantine than northern, I'd like to know why it's called 'Celtic' at all. 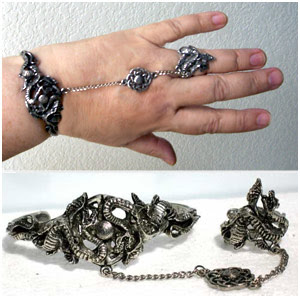 This was in the Celtic section.  Yes, the Celtic section.  Because mixing modern fantasy dragons with Anglo-Saxon knotwork is so very Celtic!
These little gems come from Chivalry Sports, which makes a lot of noise about being your One Stop Shop for all things Ren/Medieval.  But all too often, its products are absolute crap.
Posted by veruniel at 16:15 3 comments:

I had high hopes for Mittelalter Kostueme.  After all, they pictured real Medieval illuminations on the splash page.  But one glance at their offerings makes it clear that they spent no time looking at said illuminations.  Tips for twits: it's a really bad idea to post period images when your own sewing doesn't measure up; it'll show us exactly how many mistakes you're making!

Now, I have seen mens' tunics slit in the front and back and I've seen them slit on the sides.  But slit in four places?  I don't think so!  I guess this is just what happens when reenactors use so little yardage that doing things the right way would look even more bizarre.

I think we've got four way slits again.  And what is the deal with the shoulders?  If this were a good tabard, there's no way the fabric at the shoulders would stick out that far.  If it were a good tunic, there'd be attached sleeves.  Either way, this looks idiotic.

Oh, brilliant.  Let's throw a gown with minimal fabric over a much fuller underdress.  Are they going for the fishtail effect? 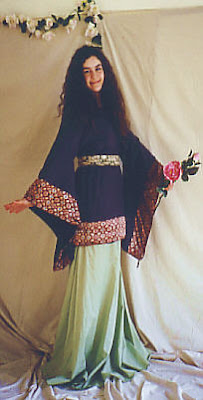 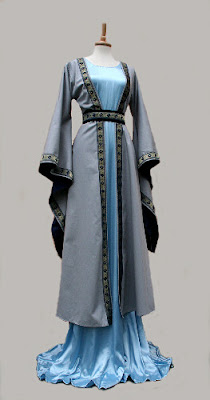 They call this a houpelande. I thought these were houpelandes, but perhaps I was mistaken. 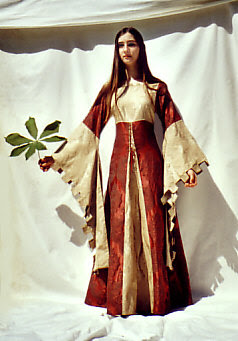 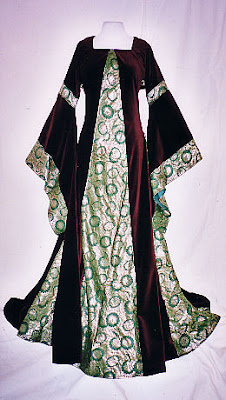 Oh, joy.  Ugly, unperiod brocade and some of the most bugfuck seam placements I have ever seen!
In short, the garb here is frequently silly, and about as period as Holy Hand Grenades.
Posted by veruniel at 12:00 4 comments:

I'm starting to really dislike it when seamstresses don't give their sources.  It means that when I see something weird, I need to trawl the net looking for precedents. 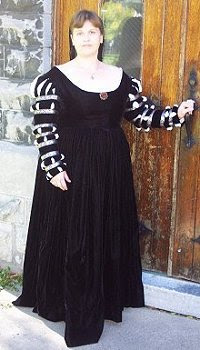 Like this thing.  The Italianate bodice made me suspicious at once.  I combed through all the German Renaissance portraits I could find, and saw no evidence that women ever combined scooped necklines with landsknecht sleeves.

Now, there may be some obscure source that I've missed.  But if it's so hard to find, it really would be nice to document it.

Update: a helpful commenter has found it! More information in the comments.
Posted by veruniel at 15:49 4 comments: